A common question is: has bug sweeping become part of the new normal? State and territory governments have done what they could afford to keep businesses afloat during COVID-19. Direct economic support has helped, but there’s a limit to what you can do when consumers are buying less. Tensions are rising in the office and at home. We have become a more worried, more querulous nation.

Is This Why Bug Sweeping Has Become Part of the New Normal? 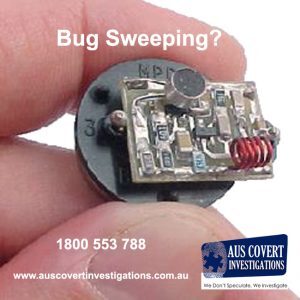 To a large extent, yes, although cybercrime and bugging were becoming more common before the pandemic arrived. Add struggling businesses chasing fewer customers, and some are becoming more desperate. Then it becomes clear why bug sweeping has become an essential in every private investigator’s toolkit.

It stands to reason that more businesses are even more desperate to spy on their competition, and steal their trade secrets. They just need to find an insider employee in financial difficulty, and they are half way there. But these are not the only circumstances where bug sweeping has become part of the new normal in Australia.

Personal relationships are strained as a result of working from home.

Not everybody has a job they can do from home. A growing number of couples have one partner going to work, while the other works at home, or is even retrenched. This is not the same as the ‘bored housewife syndrome, although there are some similar knock-ons in the form of the ‘suspicious partner’.

They could purchase a miniature video camera over the internet, and hook it into their smartphone. This is an invasion of the other’s privacy and the aggrieved partner has a right to redress. So for that matter, does the owner of the business?

But the difficulty they face is finding the bug.

Most miniature cameras connected to the internet were made for government use, but their original purpose has been corrupted. They are so well made to be concealed, that lay people may not spot them before their eyes.

However, they are, at the end of the day, electronic devices emitting shadow signals. AusCovert Investigations has military-grade devices capable of detecting and tracing cameras and microphones of all kinds.

Bug sweeping has become part of the new normal for our detectives during these unusual times. Please call 1800 553 788 or send us a message so we can meet. And explain what we do, how we do it, and how this could benefit you.